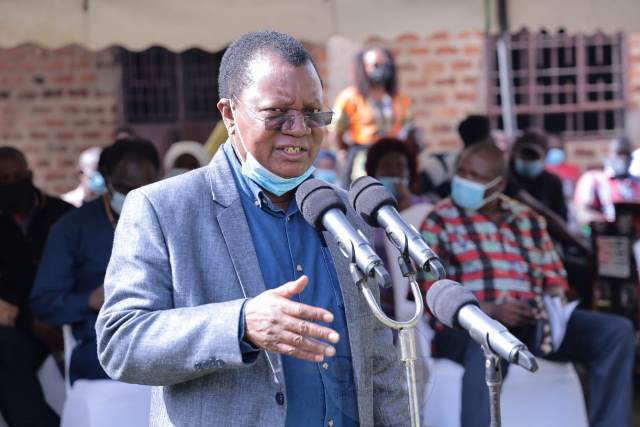 Deputy Governor H.E Prof Philip Kutima has revealed that Malava Milk factory will require at least 150,000 liters of milk per day to operate.

He said the factory is almost complete to start its operations and it will be a major boost to the economy of the County.

Speaking at Shamoni in Malava Sub County during the funeral of Mama Emily Lyaka Angatia wife to the late Hon Joshua Angatia who served as MP for Malava and Minister for Health, the Deputy Governor said the County Government is investing in artificial insemination (AI) services to increase milk production.

“We started One Cow Initiative to give dairy animals to farmers as one way of increasing milk production so that when the milk factory starts we have enough milk to operationalize it,” said H.E Prof Kutima.

He enumerated projects done by the County to uplift the living standards of the people saying some of the projects like farm inputs programme have started paying off.

“Since we started farm inputs programme we have witnessed an increase in maize production and this has made our County to be food secured,” he said.

In his condolence message read by the Deputy Governor, the Governor H.E Dr Wycliffe Oparanya said death of Mama Emily has robbed the society a professional teacher who served with passion and dedication.

He said the late Mama Emily mentored many people whom she taught with a vision of giving them a bright future.

“She participated in many community initiatives targeting women and children to give them hope and a future,” said Governor Oparanya.

He noted that Mama Emily was a key pillar in her family who stood firm and mobilized support for her husband the late Hon Joshua Angatia during campaigns.

“She was a dedicated farmer who planted maize to contribute towards food security of our County. Her death is a big blow to her family and the society,” he said.