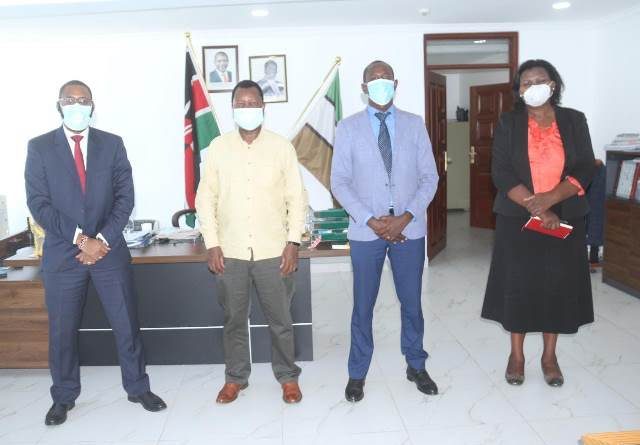 Top leadership of the Kenya Medical Practitioners Pharmacists and Dentist Union (KMPDU) has expressed their delight with the progress made by the Kakamega County Government with respect to meeting the requirements of the health workers Collective Bargaining Agreement (CBA) signed between the Government and the medics.

The purpose of the meeting was to discuss employee relations in the health sector in Kakamega County with the aim of creating a framework that will improve the welfare of the health practitioners.

The Deputy Governor thanked Dr. Mwachonda for reaching out to the County Government an initiative he noted will guarantee better relations with health workers. He added that Kakamega County has invested heavily in structural infrastructure as well as medical supplies and equipment in health facilities across the County.

“Despite the funding challenges, we are on course with recruitment and promotions of medics as a way of motivating them to provide better services to the residents,” he said.

The County Secretary and Head of Public Service Madam Jacinta Aluoch Odhiambo on her part said Kakamega County has met most of the grievances raised by the health workers.

The KMPDU Sec Gen Dr. Mwachonda expressed his satisfaction with the strategies laid down by the County Government in honouring the CBA. He called for dialogue to avert industrial actions in future.

Dr. Mwachonda was accompanied by Dr. Charo Sande who is the Union’s Western region Secretary.