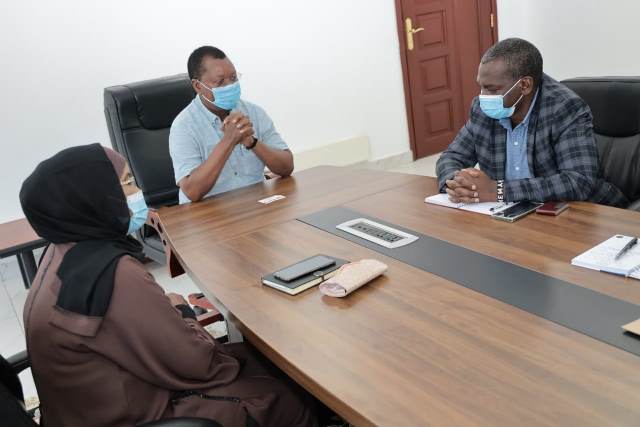 A delegation from the National Land Commission (NLC) Thursday paid a courtesy call on Kakamega Deputy Governor H.E Prof. Philip Museve Kutima at the County Headquarters where matters concerning Mumias Municipality land triangle that has had unending disputes were discussed.

The Deputy Governor informed the visitors that the County Government formed a land task force to solve the disputes that have for years hindered development of the Mumias Municipality and called on all stakeholders to work closely with the Government to resolve the issues amicably.

County Executive for Lands, Housing, Physical Planning and Urban Areas Hon. Robert Makhanu regretted that due to endless injunctions on public land, potential investors have delayed rolling out mega projects that would create employment to residents and also help boost the County’s economy. Hon. Makhanu however assured the NLC team that the County Government will endeavour to provide a peaceful solution to the disputes.

National Land Commission’s Commissioner Mr. Reginald Okumu affirmed that NLC is in the County on a fact finding mission on the aspects of land management and development. He advised that the County Government should speed up the process of polishing her strategic plan in order to hasten required investment with the aim of transforming Kakamega Municipality into a City.

“Every stakeholder has to embrace team work and focus on achieving long term solutions to land disputes,” he added.

The team later on made a site visit to the Mumias Municipality land triangle for inspection and assessment.