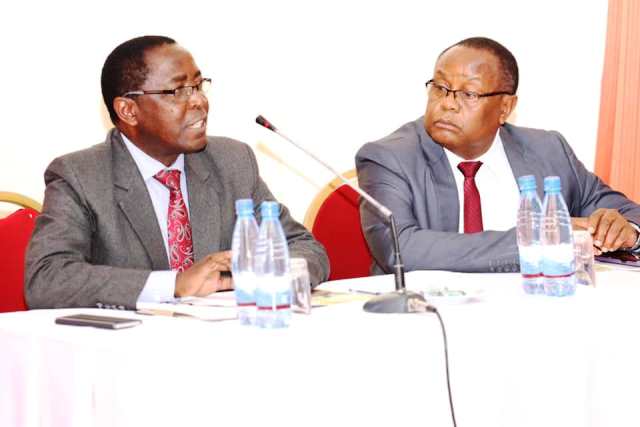 The CECM for Finance Mr. Geoffrey Omulayi has called on all ministries and departments with any pending bill(s) to fast track the payment process before the national treasury disburses funds to counties.

He said this during the weekly revenue meeting at Golf hotel today attended by senior government officers. “The national treasury will soon be releasing the next batch of monies to counties but before that is done ensure proper documentation to facilitate payment is in place,” he said.

The CECM also called on all departments with staffing needs to urgently address the challenges using the right channels. “We are aware that we need to increase the number of meat inspectors, for instance, to meet the needs of our people,” said Mr. Omulayi.

During the meeting, plans about formation of Kakamega County Rural Water Company were also revealed by the CEO of Kakamega County Water & Sanitation Company (KACWASCO) Mr. Fred Hatua. The CEO said the company’s mandate will be to increase clean piped water connectivity in the rural areas once it is fully operational. Currently, KACWASCO covers the urban (town) areas only. The move will see community owned water projects taken over by the county government through the rural water company in a bid to also manage and collect revenue from that essential source. Khwisero, Mwihila, Likuyani and Soi are some of the community owned water projects that have so far handed over their ownership to the county government.

MEANWHILE, a team from the County Government of Kakamega has just returned from a successful benchmarking mission to Kigali, Rwanda. The team led by CECM for Lands, Urban Areas and Physical Planning, Mr. Alfred Matianyi, was out to learn on best practices in urban planning, waste management and urban transportation in the city of Kigali, reputed to be one of the cleanest and best organized in Africa.

“We had fruitful discussions with Rwanda Cooperative Initiative which focused mainly on waste management, greening and beautification of the city,” Matianyi told the weekly revenue collection updates meeting.

“The environment in Kigali is exemplarily tidy,” Mr. Matianyi said, adding that the organization issued his team with necessary documentation Kakamega needs in efforts to implement a working and realistic urban planning model. On urban transportation, the CECM reported that the transportation sector in Kigali is meticulously organized and sensitized.

“Stakeholders are committed to ensure that policies are implemented,” he said.

Mr. Matianyi said that for a modern and working transport system to be successful, documentation, policies and legislation need to be in synch. “Our experince from the mission gives us confidence that we are on the right track and moving a notch higher,” he said.