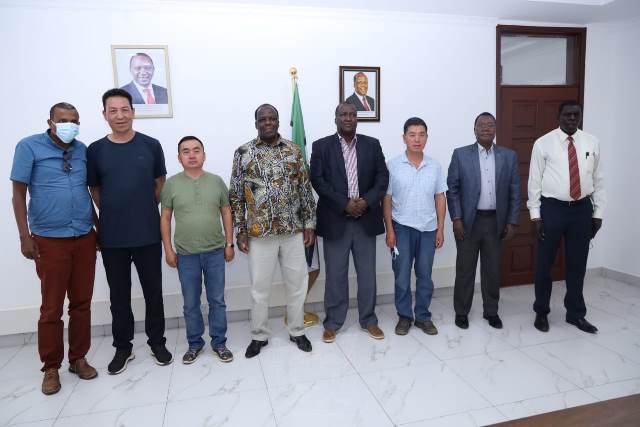 According to Governor Dr Wycliffe Oparanya and Cabinet Secretary for Petroleum and Mining John Munyes, the Head of State will arrive in Kakamega on Sunday to begin his tour of Western region.

CS Munyes said all gold from all parts of the country will be refined at the factory before it is exported.

He noted that Kakamega has a high potential of gold as a lot of gold has been discovered in the region forming the decision to construct the refinery in the County.

“We are here to inspect the site of construction ahead of Presidential visit. He is expected to launch construction of the refinery on Monday,” said Mr Munyes.

The CS said the refinery will also serve many artisanal miners in the region who engage in gold mining as economic activity.

“It will be a State-of-the-art refinery that will serve the whole country. We want all gold from different parts of our country to be processed and refined here in Kakamega before it is exported,” he said.

He thanked the County Government of Kakamega for providing a 10-acre piece of land for construction of the factory.

“At least 30% of revenue generated from this factory will go direct to the locals and the County Government. I thank the investor for showing interest in this project,” the CS said.

He said the investor won the tender through a competitive process.

Governor Oparanya said construction of the refinery will be a major boost and milestone to the County as the County Government will get 20% share of the revenue generated.

He said the factory will also provide employment opportunities to hundreds of people directly and indirectly.

“We expect this project to be completed within one year. It has been a long journey but finally we are almost through,” said Governor Oparanya.

He said the factory will be operationalized before the next general election.

“We have been longing to have a gold refinery in the region and the National Government has accepted our request. This is a major boost to the region,” he said.

Dr Oparanya said as leaders they are also expecting a big announcement from the Head of State on the revival plans for Mumias Sugar Company.

“We expect him to make an announcement on the revival of Mumias Sugar Company which is the biggest sugar factory in the Country. Our people are suffering and if revived it will breathe a sigh of relief to them,” he said.

He dismissed claims by some leaders that they have been ignored in the preparations for the presidential visit.

He said as a Governor he has no role in the plans as it the work of the National Government officials to plan and invite people.

“Every leader will be involved. We will have a meeting on Friday that will involve all leaders. However, preparations for the visit is the work of officers in the National Government and not my work,” he said.