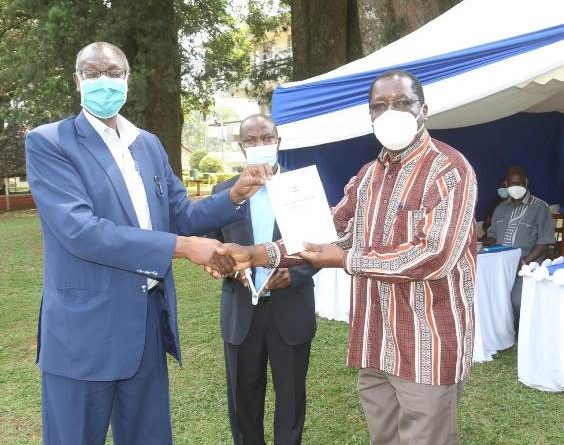 Staff working under Ampath Plus project have officially been handed over to Boresha Jamii project, marking the end of the activities of the former program in Kakamega County.

In a meeting held at Golf hotel Monday, between the two (AmpathPlus and Boresha Jamii) with the staff and witnessed by the County Government leadership represented by the CECM for Health Services Dr. Collins Matemba, it was revealed that the 307 technical staff will be retained under the JOOUST -USAID BORESHA JAMII program funded by USAID to implement the Kenya Health Partnerships for Quality Services (KHPQS) in Kakamega County. This program is also conducted in Kisumu, Nyamira and Vihiga Counties.

The focus of the program is to increase the use of quality led health and social services in HIV care and treatment, Maternal, Neonatal, Child and Adolescent Reproductive health among others.

Speaking at the meeting, Dr. Matemba said a big population is affected by the aforementioned health conditions in Kakamega County and called on the partners and staff to work round the clock to lower the scale.

“Expect full support of the County Government as we work together towards improving the plight of our people,” Dr. Matemba said as he expressed optimism that all the staff will be retained to serve under the new program.

His counterpart at the Boresha Jamii program Prof. Benson Estambale disclosed that Kakamega County has received the highest amount of funds and called for transparency and accountability from his officers to uphold the integrity and reputation of the County in management of resources.

The meeting was also attended by the County Head of Health Programmes Dr. Mike Ekisa among other senior officers from both the County Government and Partners.