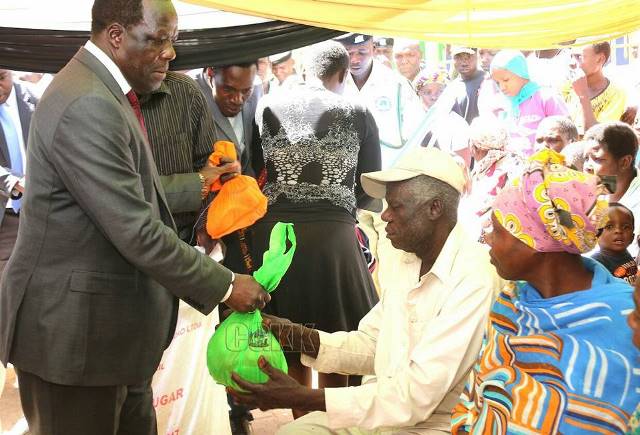 H.E Governor Wycliffe Ambetsa Oparanya has today praised citizens of Kakamega County who tirelessly contribute to the well-being of the county both socially and economically.

Speaking today at the county headquarters, Governor Oparanya reminded residents that they all have a chance to make a contribution towards improving peoples’ lives to make the county a better place than they found it. He challenged all citizens to passionately adopt the vision of making the county better for the well being of the future generations.

The Governor encouraged residents to confidently and hopefully look into the future and trust that the development programmes he has initiated will pay off and positively change their lives. He used the platform to give donations to various institutions such as schools for the physically challenged children drawn from across the county. He also gave gifts to the less priviledged members of the society who joined the him at the county headquarters to mark the important ocassion.

Governor Wycliffe Oparanya announced that he will be unveiling his new cabinet in January and sent a stern warning to county government employees involved in corrupt dealings reminding them that there will be no room for such in his, soon to be unveiled, new government. He called on all those who have earlier been involved in such malpractice to quickly pave way before he effects the changes. He singled out officers mentioned to have been soliciting for bribes from business people in exchange for protection as those among the first culprits to be sent home when he announces the changes.

Deputy Governor Prof. Philip Museve Kutima called on residents to embrace the spirit of Christmas by sharing with the less fortunate members of the society.

Present also were CEC members, County Public Service Board members led by Chairperson Rhodah Masaviru, Members of the County Assembly, County chief officers and officers from both the county and national governments among others.