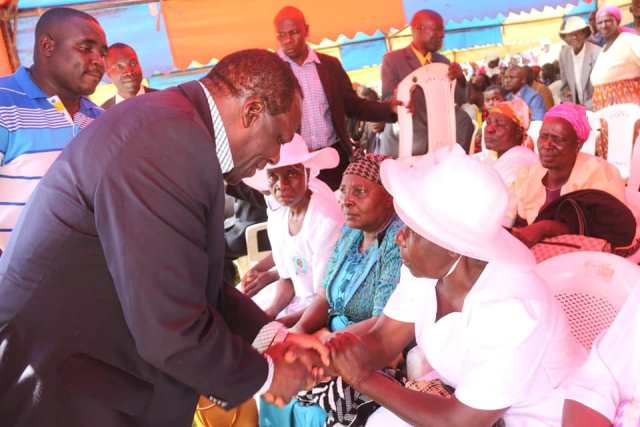 H.E. Governor Wycliffe Ambetsa Oparanya has called on the national government to transfer construction of all rural roads to county governments. Speaking at Malanga village, Shirugu Mugai ward, Malava sub county Kakamega County during the funeral service of the late John Walubengo M’mbaka, H.E. the Governor said the national government was still holding onto that very important role of roads infrastructure as residents continue to suffer at the grassroots. The Governor said as a result, counties have been reduced to beggars as they struggle to borrow funds from the national government for construction of roads in their respective counties. “County Governments receive only 15% of the national cake as 85% remain with the national government yet very little is seen at the grassroots with regards to development from the latter.Those funds allocated to Kenya Urban Roads Authority (KURA) and Kenya National Highway Authority (KeNHA) should be transferred to counties as the two state corporations have failed in their mandate,” he said.

Governor Oparanya added that leaders elected at various levels should be respected as they are the direct representatives of the people. On the ailing sugar sector, the Governor called on members of the national assembly from the sugar growing areas to ensure the sugar act that was repealed in 2013 is reinstated adding that it provided better solutions for the ailing sugar sector. He also supported zoning of the sugar sector in the cane growing areas saying that will put farmers at liberty to deliver their produce to a factory of their choice hence avoiding exploitation of the farmers by millers.