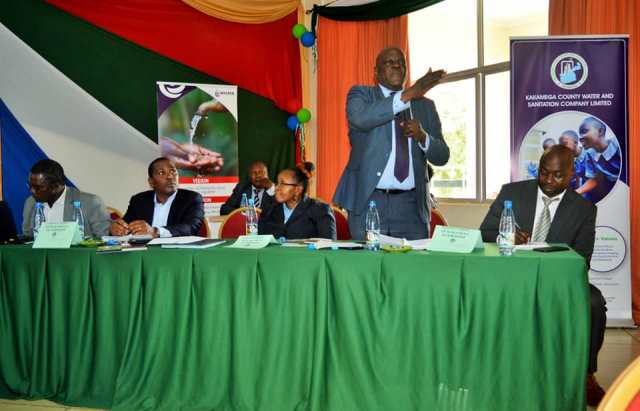 Kakamega County Water & Sanitation Company (KACWASCO) has inched a step closer to have it’s operations given a nod by the regulatory body – Water Services Regulatory Board (WASREB).

Speaking today during a consultatitive meeting with various stakeholders on the company’s licence operation at Golf hotel, Kakamega, CECM for Water, Environment & Natural Resources Baraza Wangwe who was the chief guest, congratulated KACWASCO and said the county government was working round the clock to ensure residents across the county receive regular supply of safe and good quality water. “As a government we are supportive of proper legislation and policies that will encourage efficiency in service provision to our customers by the water company,” he said. Mr. Wangwe said the county government has heavily invested in provision of clean and safe water to the residents through KACWASCO hence the need for both its internal and external consumers to realize tangible output.

KACWASCO Chief Executive Officer Fred Atua said his company was aiming at being among the first water service providers to be licenced by WASREB in the country after the water regulator introduced new licensing regulations for all water service providers. He said KACWASCO is extending its services to the rural areas to allow residents at the grassroots to receive safe and clean water. Likuyani and Khwisero water projects have already set off.

WASREB Director of Consumer and Public Affairs Herbert Kassamani hailed KACWASCO for putting customer satisfaction at the forefront of their operations. Euphrasia Luseka who represented USAID-KIWASH, a major partner of the Kakamega County Water and Sewarage Company, on their part called on all stakeholders to explore other uses to maximize on the benefits of the resource, aside from domestic use, by actively engaging in income generating activities such as starting up car wash businesses and irrigation.