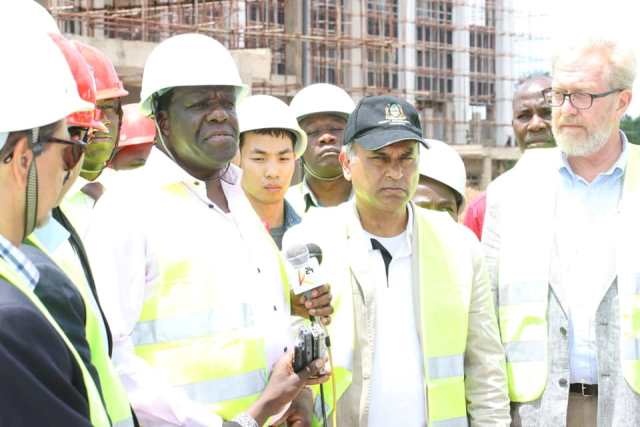 High powered delegations from the Russian Embassy and the United Nations led by Dmitry Maksimychev the Russian Envoy to Kenya and the United Nations Resident Coordinator to Kenya Mr. Sid Chatterjee have today expressed satisfaction with the path taken by the county government to better the living standards of its residents under the stewardship of H.E. the Governor Wycliffe Ambetsa Oparanya.

The two spoke in the presence of the Governor after being taken round the upcoming 750 bed capacity Kakamega County Teaching & Referral Hospital under construction at a cost of Kshs. 6.5 billion.

Speaking at the same venue, H.E. FCPA Wycliffe Ambetsa Oparanya thanked the delegations for visiting the county terming it an initial platform for further engagement and partnership on development matters between them and the county government of Kakamega.

“Phase One construction will be complete latest by March 2020 and I do welcome on board any development partner interested and willing to walk this journey with us in equipping the facility after its completion,” said the governor. The minimum cost required to equip the four storey state of the art facility is Kshs. 2 billion.

Governor Oparanya said once operational the facility will alleviate financial challenges witnessed by patients from the Western region who currently endure travelling long distances to Eldoret and Nairobi for specialized treatment at the Moi Teaching & Referral Hospital and Kenyatta National Hospital respectively. He added that the hospital will also create massive employment opportunities and turn around the economy of the county.

Cabinet Secretary for Devolution and ASALs’ Hon. Eugene Wamalwa who also in attendance said his presence symbolized the partnership between the national and county governments as well other development partners in order to achieve the national government’s Big Four Agenda. He encouraged other county bosses across the country to visit Kakamega and benchmark in various sectors including healthcare terming Kakamega county the ‘true face of devolution’.

The Russian Envoy Dmitry Maksimychev on his part expressed his amazement at the concept and size of the hospital and exuded confidence that his government will explore the available opportunities of partnership with the county government.

Mr. Sid Chatterjee, the UN Resident Coordinator to Kenya likened the facility to the Apollo Hospital in New Delhi, India and said he will look into the possibility of a public-private partnership between the United Nations and the county government of Kakamega especially in equipping the facility. “This facility clearly epitomizes the direction that should be emulated to achieve the vision of Universal Health Coverage for all and Vision 2030 for Kenya,” he added.