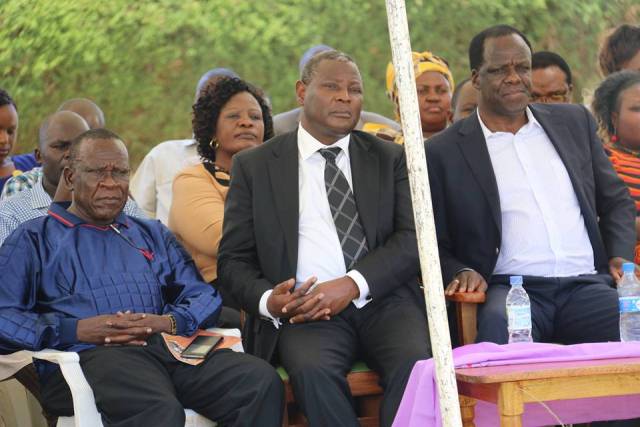 Residents of Kakamega County have been asked to desist from unwarranted voter transfers. Speaking at Mabole primary school grounds today in a funeral of the late Wycliffe Aluanga, husband to Hon. MCA of Shianda/Marenyo Ward Grace Aluanga, Kakamega County Governor H.E Hon. Wycliffe Ambetsa Oparanya told the residents not to participate in the current voter transfers being witnessed in most parts of the country advising them that they will be served in their respective wards, sub-counties and counties, hence the need for them to make leadership decisions from within their jurisdictions come 2017 general election.
This comes after residents of other counties have been reported to be crossing over into Kakamega County and vice-versa to register as voters for the benefit of some politicians. Governor Oparanya also warned residents who are moving from their usual voting stations in favor of certain individuals.
Earlier on the Governor attended a funeral of the late Victor Patrick Okatcha in Mumias West.
Mouners included, among others, County First Ladies Priscilla Oparanya and Caro Ambetsa, Hon. MPs Andrew Toboso ( Butere), Johnson Naica (Mumias West), Hon. MCAs led by Majority Leader Robert Makanu, Equity Bank CEO Dr. James Mwangi.