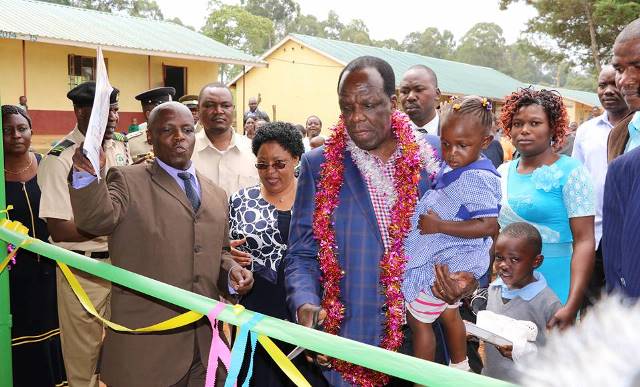 Governor Wycliffe Ambetsa Oparanya, today winded up his two day’s visit in Lugari Sub-County of Kakamega County where he commissioned and launched projects. 1. All resident students who join County Polytechnics in Kakamega County will get free training, but they are required to buy their uniforms.

2. 12 students who sat for the 2015 KCSE and scored straight As will be sponsored by the county government to study Medicine, Engineering and Computers in universities of their choice abroad.

3. Masinde Muliro University of Science and Technology (MMUST), with the partnership of the county government, is admitting students who would like to become doctors. Classes begin September this year.

4. The Government has purchased 6 more farm tractors to add to the earlier 9 machines, promising better mechanical farm operations next season. Farmers have been urged to register in advance at their Ward Office for subsidized services.

5. Beneficiaries of Mkopo Mashinani Trade Loans are encouraged to service their loans as the government prepares to disburse the second phase of the loan.

6. The 10km Roads Program to resume immediately the National government releases funds to the county government for the Financial Year 2016/17.

7. Phase I I of One Cow Initiative Program is set for this Financial Year.

8. Roads at all the 12 Sub-Counties Head Quarters to be tarmacked this Financial Year.

9. Oparanya Care Program has so far registered 21,000 beneficiaries and today was the 1st birthday of twins Whitney and Winfrey, beneficiaries of the program from Lugari whose mother passed on after delivering them.

12. Governor Oparanya, later in the day, joined the family, friends and relatives of Chief Inspector Henry Odongo Sindani in mourning his death. Until his sudden demise, the late Sindani was OCS at Muthithi Police Station in Murang’a County.