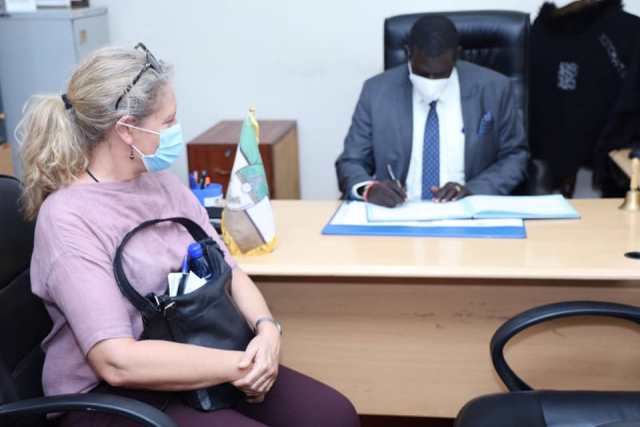 A team from the Swedish Embassy in Nairobi accompanied with officers from the Council of Governors (CoG) on Thursday toured Kakamega County to inspect the SymbioCity project, a Swedish Government funded programme situated at Sabatia, Butere Sub-County.The visitors were received by the County Executive Committee Member (CECM) for Lands, Housing, Urban Areas and Physical Planning Hon. Robert Makhanu at Golf hotel, Kakamega where they reviewed the progress of the project before proceeding for a site visit. Speaking during the brief review at Golf hotel, Kakamega, Hon. Makhanu said implementation of the Symbio project is on course in accordance with the agreed timelines. He thanked the Swedish Government for picking Kakamega County as one of the pilot centres for the project in the Country and promised to spearhead a successful completion of the task and prudent utilisation of the funds. “The end product will justify the means; we purpose to make this a model social project that will positively transform the community around this area and beyond,” he said. The SymbioCity approach is a holistic approach to sustainable urban development that puts emphasis on methods and tools for an integrated approach to sustainable urban development. Kitui, Nakuru, Homabay and Kisumu are some of the counties that have benefited from the pilot program. Others are Meru and TransNzoia counties.Hon. Makhanu who represented H.E FCPA Governor Wycliffe Ambetsa Oparanya in the meeting said upon completion, the project will house a football field for talent acquisition and development, a resource centre, an eco-toilet to serve the project environs as well as the fast rising Sabatia town and a tree nursery section among other components. The Swedish Embassy representative Anna Tufvesson expressed her delight at the work done saying it mirrors the aspirations of the Swedish Government. SymbioCity Coordinator in the County Madam Millicent Cherotich said through the project, Government officers have been trained on principles of Sustainable Urban Development such as Waste Management, Social protection, Poverty alleviation, Project Management and Economic Empowerment. The event was also attended by the Ag. Chief Officer for Lands Eng. Patrick Likavo, Director of Physical Planning Mr. Stephen Chune, Butere Sub-County Administrator Madam Joyce Wafukho and Mr. Nicodemus Mbwika the CoG SymbioCity Project Manager among other senior Government officers.