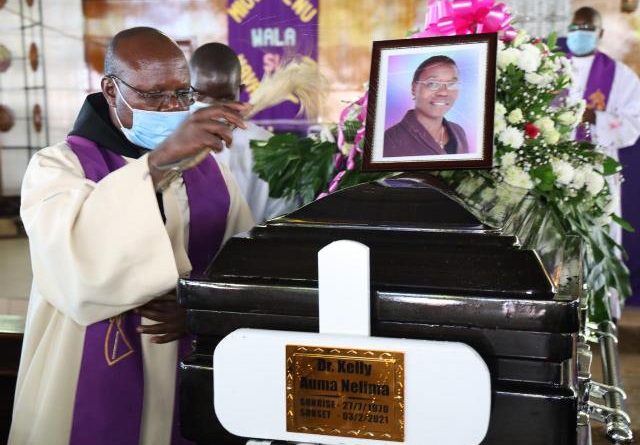 A sombre mood, sense of loss and praises to a fallen heroine characterized the requiem mass for the late Dr Kelly Auma Nelima at her Kefinco home in Kakamega.

Until her death, Dr Kelly was the Chief Officer for Livestock, Fisheries and Veterinary Services in the County Government of Kakamega.

County staff eulogized her as a humble, selfless, and focused, a polite officer who worked hard to transform her department.

Madam Rodah Masaviru CECM for Public Service and County Administration who conveyed the message of condolence from the Governor H.E Dr Wycliffe Oparanya, described the late as talented staff.

“When I saw Dr Kelly, I saw talent and great leadership in her. She has been very committed to her work and through her efforts the County Government of Kakamega has undertaken many projects that target to improve the livelihoods of our people,” said Madam Masaviru.

She revealed how she personally benefitted from her generosity and love for work when she helped her establish dairy farming.

Madam Rachel Okumu CECM for Agriculture, Livestock, Fisheries, Veterinary Services and Cooperatives described the late Dr Kelly as her sister who was readily available to discharge her duties diligently.

“In Dr Kelly I had found a close friend whom we shared a lot. She never shouted at anyone. For the short period I have worked with her she was very resourceful to our department and a key player in the achievements of our department,” said Madam Okumu.

She asked her children to remain focused and united to ensure the legacy of Dr Kelly lives on.

“She was a valuable team player whose contribution in our meetings will be dearly missed,” said Madam Aluoch.

She asked other County staff, the family and friends to emulate from Dr Kelly the spirit of politeness and humility.

Mr Jeremiah Namunyu, Chief Officer for Agriculture and Cooperatives said were it not for Dr Kelly, he would have not been to deliver on his mandate.

“We have worked closely on several issues and through her I have been able to deliver on my mandate as Chief Officer. Our Ministry has lost a great mind,” said Mr Namuyu.

The late Dr Kelly will be buried tomorrow (Friday) at Murhanda in Shinyalu Sub County.