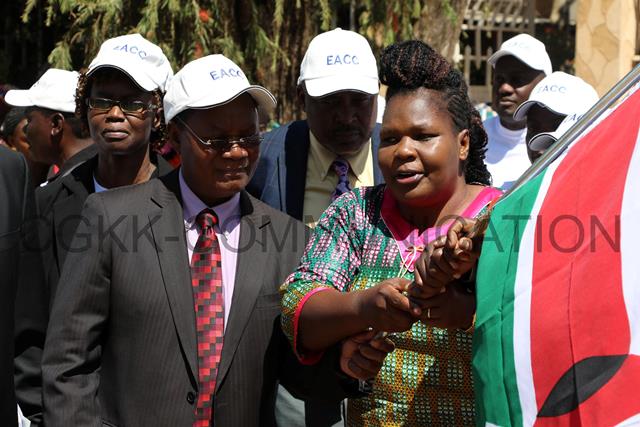 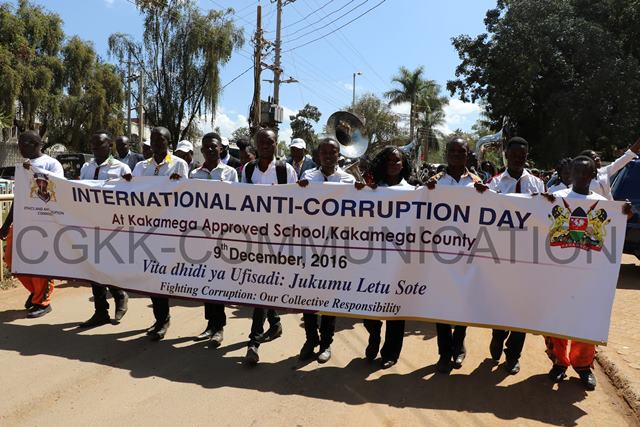 Kakamega County  hosted the 2016 International Anti-Corruption Day for Western region at Approved School with the theme being ‘Fighting Corruption: Our Collective Responsibility.’

Speaking at the Ethics and Anti-Corruption Commission (EACC) sponsored event, Ms. Charity Chepkonga Bokindo, Director in the Ministry of Environment and Natural Resources, representing Cabinet Secretary Prof. Judy Wakhungu, said war on corruption is a collective responsibility that requires the involvement of all Kenyans. Ms. Bokindo passed the CS’s message saying all public and state officials stand cautioned for abuse of office, misappropriation of public funds, bribery, conflict of interest and dishonesty in paying taxes among others. Prof. Wakhungu called on every resident to be satisfied with whatever they have so as to rid the system of corruption.

Kakamega County Deputy Gvernor H.E Prof. Philip Kutima appreciated EACC and all the stakeholders for ensuring the event was successful and for the trainings offered to County Executive and County Assembly members on how to fight the vice.

EACC Commissioner Representative said corruption is a multi-faceted phenomenon that requires everyone’s effort to eradicate as it ravages development efforts.

Mrs. Irene Kaibe representing Inspector General’s office passed the IG’s message where the police boss stressed on the need for all residents to fight corruption. Mr. Boinnet said his office has put in place programs like the automated KRA function- itax and the corruption prevention committe to fight corruption.

In attendance also were Kakamega and Vihiga county government CEC members, Officials from Busia County, Reprentatives of senior officers from EACC, Office of Director of Public Prosecution, Auditor General, KUPPET among others.