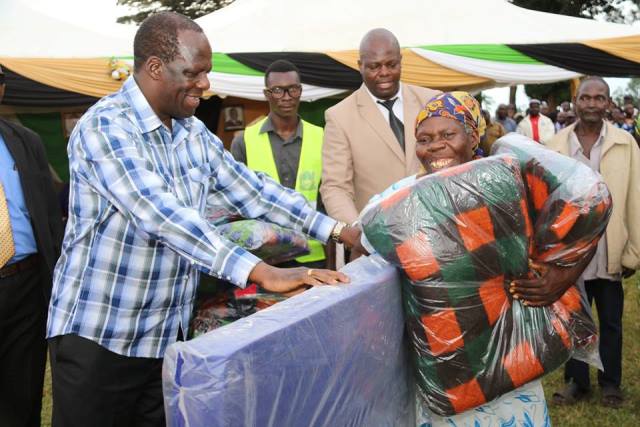 Men and women of Khwisero Sub-County who have lived in deplorable huts for years today have a reason to smile courtesy of The County Government of Kakamega’s Shelter Program. The 24 aged beneficiaries from the four Wards of Khwisero Sub-County (Kisa East, Kisa West, Kisa North and Kisa Central) received two blankets and a mattress each, fulfilling the Governor’s promise to the residents of Kakamega County that his government will take care of the aged and the less fortunate in the society by building them new houses and buying new bedding material for them. The first phase of this program will see 360 houses built across the county to the rightful beneficiaries. Others who went home happy today are four youth groups from the Sub-County who received car washing machines and 200 litres water tanks to empower themselves. A similar function took place in Shinyalu Sub-County last Friday during the launch of the tarmacking of Khayega-Shinyalu Road, where 36 elders and 6 youth groups benefited from the County Government.

Speaking today at Mulwanda primary school grounds during a public participation rally, Governor Oparanya announced that the government has plans to increase the number of beneficiaries of these programs so as to improve the lives and economy of many residents of Kakamega County.

While in Khwisero Sub-County, Governor Oparanya visited one of the beneficiaries of the Shelter Program in Bushibungo village before proceeding to inspect the County’s Khwisero Polytechnic where he announced that the government will from now henceforth pay fees for all the students in government polytechnics. The students will only be required to buy their uniforms. The Governor challenged the learners to create job opportunities for other people and become self reliant as they pursue more skills from higher institutions of learning.

Governor Oparanya who was accompanied by Honorable Members of the County Assembly and senior officers from both governments gave cheques to the following institutions for construction and upgrade of facilities: