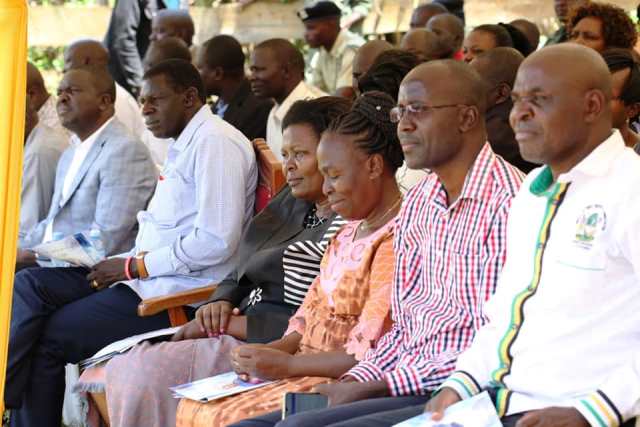 The late Mama Selina Kwova, the mother to waziri John Baraza Wangwe of Water, Environment and Natural Resources department was today laid to rest at her home in Mukangu, Navakholo Sub County.

Speaker after speaker paid tribute to the late mum saying she was an extraordinary woman full of generosity, strong Christian values, high sense of discipline and an ardent advocate for education.

In his remarks delivered by the CECM for Social Services, Youths, Sports and Culture, Hon. Robert Makhanu, the governor H.E. FCPA Wycliffe Ambetsa Oparanya said Mama Selina was a remarkable woman of dignity, kindness and love for family.
“One would have expected that after a tough journey in life, she would sit back and enjoy the fruits of her labour in her sunset days; but it was never to be,” said the County boss in his written condolence message.

Mama Selina was also credited with bringing up her children in strict Christian discipline and moral framework. She is survived by eight children and 27 grandchildren.

Hon. Makhanu took the opportunity to assure Navakholo residents of plans by the County government to improve the road network in the Sub County while also challenging members of the County Assembly to give more budgetary support to the roads upgrade vote.

He also urged Kakamega County residents to discard cultural practices that prevented youths from taking over newly built houses for their deceased parents, adding that the County Government shelter programme for vulnerable elderly citizens was being undermined by such outdated practices.