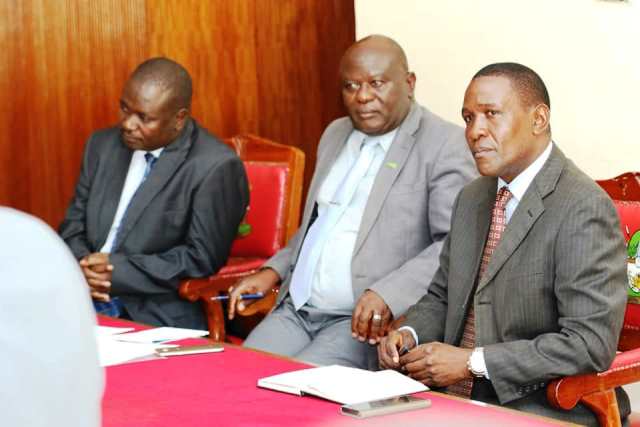 A delegation of senior government officers from the county government of Vihiga and Vihiga County Assembly are on a three day benchmarking mission in their neighbouring county of Kakamega on several areas of interest key among them being;
i) County Administration
ii) Public Participation and;
iii) County Assembly Acts among others.

Kakamega county government Ag. Chief Officer for Public Service and Administration Mr. Lawrence Omuhaka was on hand to receive the visitors at the county government headquarters chambers hall where he expressed his delight in hosting the team terming the mission a good platform to exchange ideas and learn from each other.

“Not so long ago we were in Kiambu county to learn from them on how they collect their revenue and I have to say the experience is positively and steadily impacting on our revenue collection especially using the cashless system of revenue collection,” said Mr. Omuhaka.

The Chief Officer took the team through the organisation of the devolved units starting from the lowest level, the Community Area to the Sub county level underscoring to them their roles and operations as well as the various relevant acts responsible for operationalization of all these structures.
“The County Assembly is a very essential entity in this arrangement as all these programmes have to be entrenched in law for proper functioning hence the need to closely work with the legislative arm of the government,” he added.

Aside from organisation of the devolved units the C.O also highlighted various projects the government was undertaking such as the upcoming state of the art Kakamega Teaching & Referral Hospital, Bukhungu stadium now in its second phase of construction, the improved road network across the county and construction of industries starting with Malava Dairy Plant, among others.

Vihiga county Chief Officer for Public Service and Administration Mr. Gilbert Njira who was also the head of delegation thanked the hosts for the warm welcome adding that Vihiga has a lot to learn from Kakamega having been under the larger Kakamega district in the previous government structure. He also welcomed Kakamega county officers to learn from Vihiga county especially on the GIS laboratory that has assisted in monitoring government projects across the county.