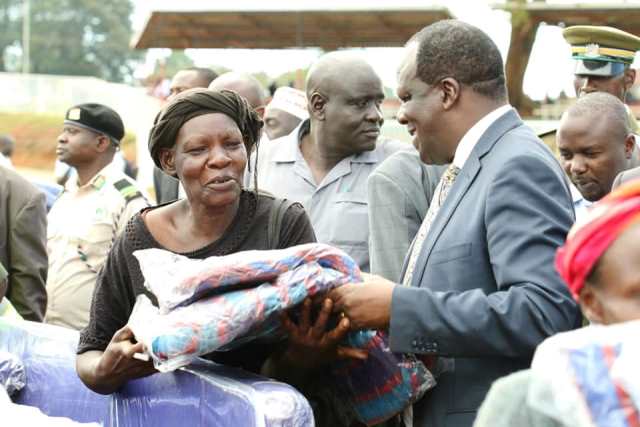 Today was a great day for poor and vulnerable members of Kakamega County community as they received decent houses, mattresses, blankets and cash from the county boss.

H.E. governor Wycliffe Ambetsa Oparanya received warm applause from a crowd of enthusiastic receipients each time he announced people-oriented initiatives by the County government to address socio-economic challenges facing the majority of residents through the County Shelter Improvement Programme that is now in its fourth phase.

Six houses per ward per year in five straight years towards alleviating the living conditions of vulnerable groups; involvement of Community Area Administrators to ensure blankets, mattresses and cash reach the most deserving people; automatic NHIF health insurance cover for all persons in vulnerable groups; subsidized quality seeds and fertilizers for farmers come January 2020; Shs400 million clean piped water project and electricity supply to households including the very poor by 2022; a huge Shs1 billion roads upgrade programme budget for the current financial year and more allocations for road maintenance as soon as the rainy season is over; equipping ECDEs and a host of other support initiatives for early childhood education as well as increased employment opportunities for youths and women under the
County Youth and Women Empowerment Programme and the on-going construction of Phase II of Bukhungu Stadium to transform it into international status.

The people’s appreciation and approval of all these initiatives as the governor mentioned each one of them was certainly heart-warming.

For these efforts, Kakamega County is now respected throughout the Country and its governor honoured by colleagues through election into the highly influential and prestigious position of chair of Council of Governors, the governor concluded as he wound up his speech at the launch of Phase IV of the County Shelter Improvement Programme.

Oparanya reiterated his ambition to a higher office at the national level and urged Kakamega and western region residents to support the proposals put forward through the Building Bridges Initiative, saying the country appreciated the peace and tranquillity brought about by the “handshake” between President Uhuru Kenyatta and Rt. Hon. Raila Odinga.

Earlier, on a sad note, H.E. the governor requested the guests to observe a moment of silence in remembrance of the late Rems Warui who until his death on Thursday this week, was the County Head of Enforcement.