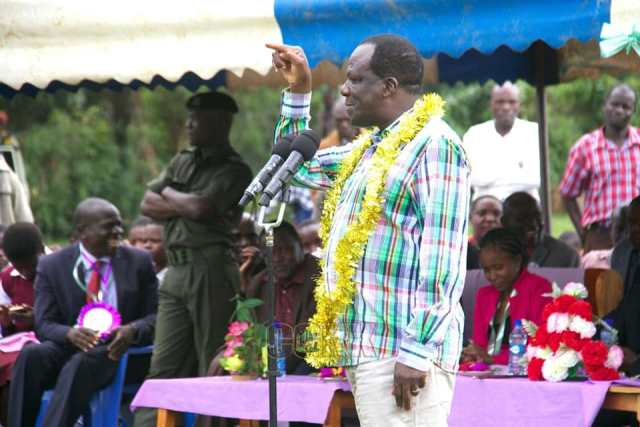 H.E the Governor paid an impromptu visit at Namirama Girls High school, in Navakholo during the school’s term 1 closing ceremony. The Governor who is on a day long roads inspection tour of Mumias East, Navakholo and Malava sub counties called on the scholars to seriously embrace education and encouraged the teachers to live up to the expectations of the society by being role models to the young citizens.

Navakholo Member of Parliament Hon. Emmanuel Wangwe who was the chief guest thanked the Governor for the huge investments the county government has injected in the education sector. The legislator announced that he was in support of Governor Oparanya’s 2022 Presidential bid adding that the nation needs visionary leaders like him who are ready and better placed to effortlessly deliver the country’s vision 2030 dream.

Masinde Muliro University of Science and Technology (MMUST) Vice Chancellor Prof. Frederick Otieno who was in attendance hailed the Governor’s manifesto and development record for the past four years. He specifically mentioned the county government’s collaboration with the Kakamega based institution to offer medical services to the residents. The government signed an MoU with MMUST to train nurses in anticipation of the upcoming Kakamega County Teaching and Referral Hospital.

Present as well was the county Chief of Staff Mr. Robert Sumbi, Roads, Infrastructure and Public Works CECM Dr. Collins Matemba and Members of the Kakamega County Assembly among others.