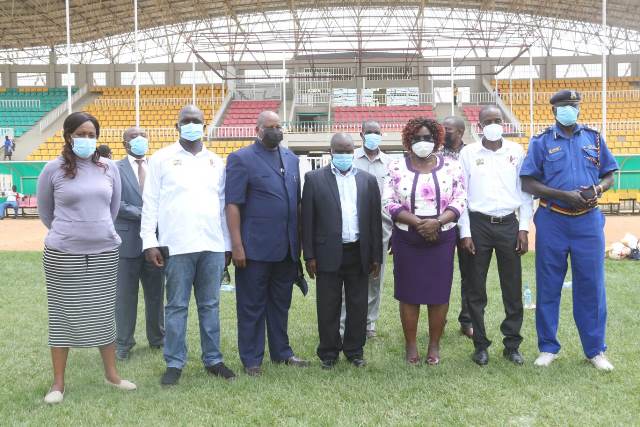 A team from Kenya’s athletics governing body Athletics Kenya (AK) Wednesday paid a courtesy call to the Kakamega County Executive Committee Member for Social Services, Youth, Women Empowerment, Sports and Culture Mr. Kassim Were in his office at Bukhungu Stadium, where they discussed a wide range of issues touching on the growth of the sport in the County.

Mr. Were said the aim of the visit by the delegation was to inspect sports facilities in the County specifically the Bukhungu International Stadium in readiness for the upcoming World U20 Athletics Championships that will be held at Moi Sports Centre Kasarani in Nairobi City from 17th August 2021.

“In addition to the fete, l have also implored on the AK team to come down to the grassroots for talent acquisition; Kakamega County is endowed with massive talent in Athletics, Rugby, Soccer, Basketball, Volleyball and Netball among others,” Mr. Were said and welcomed all the participants to Kakamega which he defined a hub of all sports disciplines.

According to the Head of Delegation Mr. Johana Tonui 128 Countries have confirmed participation. Mr. Tonui said spectators will not be allowed into the stadium to watch the event due to the Covid-19 pandemic, however some local and international television channels will stream all the happenings live.

“Some of the participating teams will pass through Kakamega on their way to Nairobi and they may require to use these facilities before their final journey to Nairobi, by road,” Mr. Tonui added.