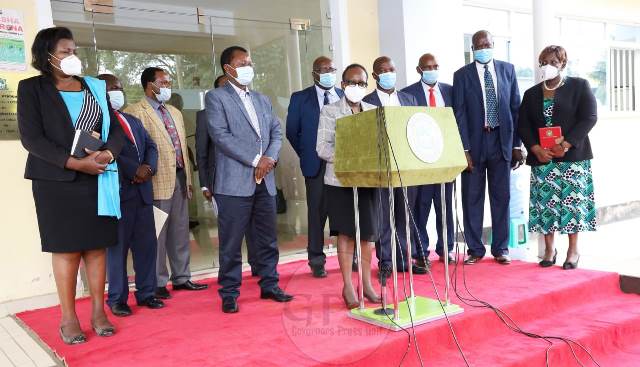 Auditor General Madam Nancy Gathungu says Kakamega County is among few devolved units with flagship projects that will transform the lives of people.

The Auditor General was speaking at the new Kakamega County Teaching and Referral hospital after leading her team in touring the project and Bukhungu stadium.

She said most of the key projects among them the stadium and Level Six Hospital will not only benefit people of Kakamega County but the entire country.

“I have toured some of the projects and I am very impressed. These key projects will transform many lives and contribute to the economic growth of the County and the country at large,” said Madam Gathungu.

She regretted that delay to disburse funds by the National Treasury has affected service delivery at the devolved units and crippled construction of key projects.

She added that she was impressed that despite financial challenges, Kakamega county has made a very positive stride in development.

“The County Government should now plan adequately on finishing the projects in phases and put the completed phases into use so that people can get value for their taxes,” she said.

He noted Kakamega is yet to receive its share of revenue from the National Treasury since October last year paralyzing key projects.

“I thank you for the courtesy call and visiting some of the projects in the County. We are committed to ensure quality services to our people,” said H.E Prof Kutima.

The Deputy Governor noted that the County is well prepared to deal with the third wave of Covid-19 pandemic.

He dismissed rumors that Astrazeneca-Oxford Covid-19 vaccine causes blood clot saying he took the jab but he has not experienced any negative effects.

“Most of us in the County got the jab and it has had no bad effects on us. I encourage people to get the vaccine to protect themselves against the virus,” he said.

He revealed that more vaccination centers will established in the County.

Dr Beatrice Sabana CECM for Finance, Economic Planning and ICT who was among senior county officers present when Auditor General earlier paid a courtesy call on Deputy Governor said the County Government values the partnership between the County and the Office of the Auditor General.

“As a County we embrace the audit reports as we use them to improve on our shortfalls,” said Dr Sabana.

She noted that the County Government has strengthened its internal audit department by employing at least 27 auditors.