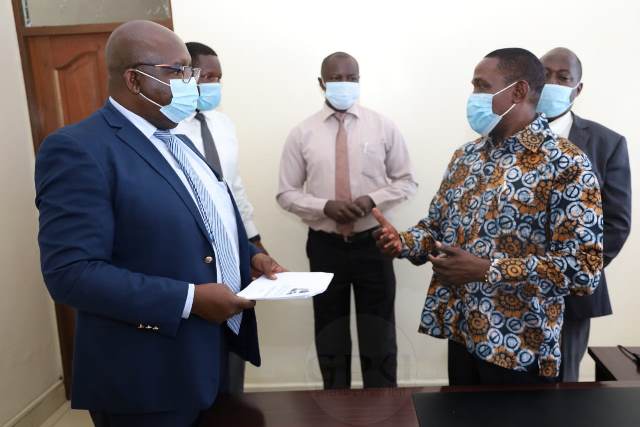 He handed over his docket to Ambassador James Ochami who is the Chief Officer for Finance.

Deputy Governor H.E Prof Philip Kutima presided over the ceremony congratulating Mr Omuhaka for his appointment and wished him well in his new role.

Mr Omuhaka joined the County Government of Kakamega in 2014 as Head of Human Resource Management before he was promoted to be Chief Officer for Economic Planning.

He also served as Chief Officer for Public Service and Administration in acting capacity.

“I am grateful to H.E Governor Dr Wycliffe Oparanya for giving me the opportunity to serve in his Government since 2014. The Governor has been supportive and through his visionary leadership I have learnt a lot,” said Mr Omuhaka.

He promised to continue supporting Kakamega County saying he will ensure the County gets a share of National Government projects to benefit residents.

“I will remain in touch with my people in Kakamega because they have built me. I will ensure Kakamega gets a share of projects from the National Government,” he said.

During the recent reshuffle of CAS, President Uhuru Kenyatta appointed Mr Omuhaka as CAS in charge of Livestock and Fisheries.

Mr Eugene Milimu Chief Officer for ICT, e-government and Communication was present during the brief handing over ceremony.