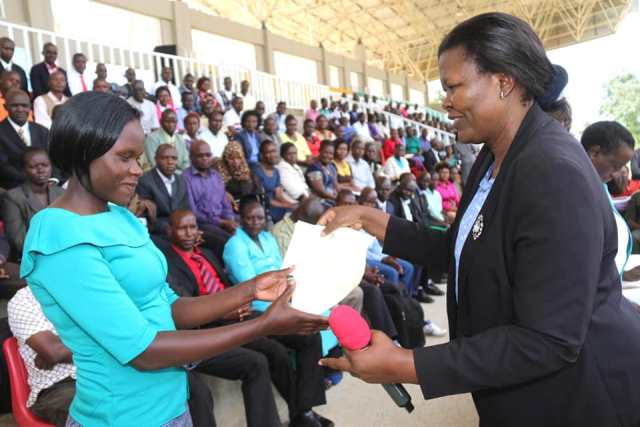 THE County Government of Kakamega today issued appointment letters to 400 newly recruited administrators. The administrators will be in-charge of community areas. Currently the government has functional Sub County and Ward Administrators offices under the Ministry of Public Service and Administration.

Speaking during the function, County Secretary who is also the Head of Public Service Madam Jacinta Aluoch Odhiambo welcomed the new entrants into the government system and called for dedication and flexibility from them as they join the public service. Madam Aluoch urged them to observe high levels of Integrity and exercise inclusivity, fairness and discipline as they begin their mandate of service delivery to the public in accordance with Chapter Six of the Kenyan constitution. She however cautioned them against engaging in malpractices such as corruption or/and nepotism while serving members of the public adding that the same could lead to instant dismissal from the service.

The County Secretary added that through the structure of the county government, wananchi at the grassroot should eventually feel and benefit from the gains of devolution hence the need for regular public participation and involvement of the residents by the government through the structures. “H.E. the Governor is really passionate about the community administration program and will stop at nothing to ensure its full implementation,” she said.

The appointment of the community administrator is a step towards ensuring the county administration reaches the grass root levels to entrench public participation in government matters. The officers will undergo a three-week intensive training to induct them into the public service.

Present during the function were CEC members led by CECM In-charge of PS&A MR. Joseph Indire and his Chief Officer Peter Lukoye, MCAs led by Assembly Chief Whip Hon. Dickson Ombayo, Advisors in the Office of the Governor and government officers among others.