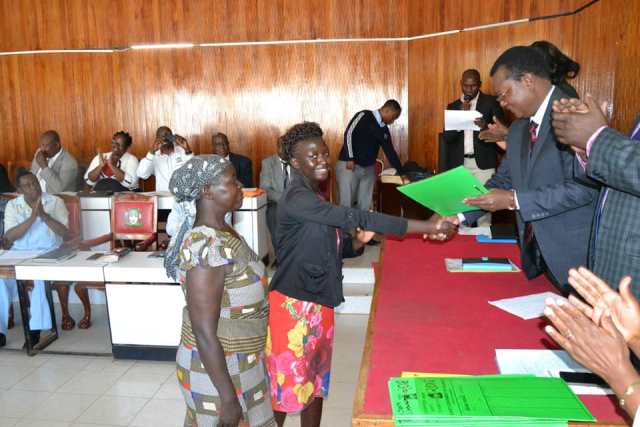 Deputy Governor H.E. Philip Museve Kutima today flagged off 12 students from Kakamega County, one from each sub county, for studies in China and Nairobi under the Kakamega County Scholarship programme. The programme started by H.E. Governor Wycliffe Ambetsa Oparanya when he was a Member of Parliament for Butere constituency and spread to the other 11 Sub Counties after his election as the Governor of Kakamega, is aimed at supporting bright and needy students who perform exemplarily well in the Kenya Certificate of Secondary Education (KCSE) to access quality education in renown institutions in the country and around the world. After completion of their studies, the scholars, most of whom are persuing engineering and medicine courses, are expected to offer their knowledge and service to the county for a certain period of time before seeking greener pastures elsewhere.

Deputy Governor H.E. Prof. Philip Museve Kutima who was the guest of honour congratulated them for clinching this year’s scholarship following a rigorous, open and fair selection process that was conducted by the Kakamega County Education Fund. He assured them of employment with the County Government of Kakamega after successful completion of their studies but challenged them to work hard and be good ambassadors of the county and country.

Education, Science and Technology CECM Joseph Indire called on the scholars to remain objective and remember the residents of Kakamega County have invested in them through education. His sentiments were echoed by County Secretary Madam Jacinta Aluoch Odhiambo. She also called on the scholars headed for China to realize that they were joining the international community and so much was expected of them.