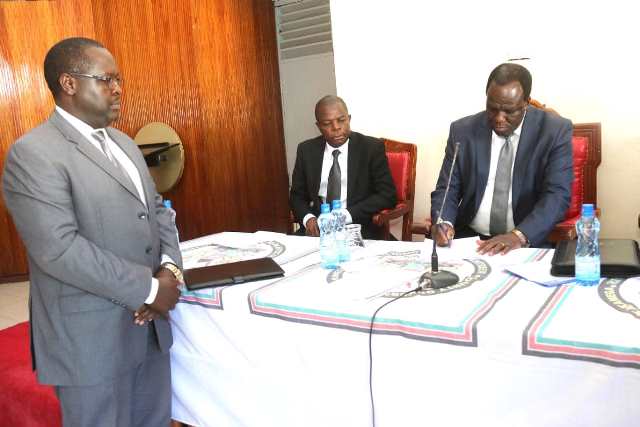 Flanked by Deputy Governor H.E. Philip Museve Kutima and Kakamega County assembly Speaker Hon. Morris Buluma, the Governor said the enactment will go a long way in enabling the county government to collect revenue through property and service charges as provided for by the Kenyan constitution and relevant legislation. “Governments worldwide are not engaged in business but raise money through taxes from wananchi to be able to provide services,” he added. The Governor said Kakamega County targets to raise Shs. 800 million or more this financial year due to various revenue collection strategies employed by the county to enhance revenue. He said Kakamega county has missed out on the yearly allocation from the Commision of Revenue Allocation (CRA) due to failure by the county to meet the revenue targets set by the CRA

H.E. the Governor however decried delayed disbursement of funds to counties by the national government saying it has slowed down the development agenda in counties. He advised county governments’ countrywide to reduce on pending bills so as to manage the inconsistencies in disbursement of funds from the national treasury. The Governor used the opportunity to invite residents of Kakamega County and the country for the upcoming Mashujaa Day celebrations to be held at Bukhungu Stadium, Kakamega on 20th, October 2018.

Elsewhere, Deputy Governor H.E. Philip Museve Kutima has called on residents of Butali-Chegulo ward and Kakamega county in general to empower their children through education terming it the yardstick of ridding themselves from the threatening fangs of poverty. Hon. Kutima who was speaking at Muyundi village, Butali-Chegulo ward in Malava sub county during a funeral service of the late Stella Nambafu said education can change the fortunes of individuals and transform a society. “I was born a poor boy from a poor family here in Butali but due to the hard work I put in at school and the support I received from my parents, I have managed to overcome my childhood challenges,” he said. On 2022 politics, Hon. Kutima reminded residents to vet all the aspirants who have expressed interest in running for various positions but cautioned them against voting for them on basis of flowery spechees or hand-outs given but a proven track record and sobriety.