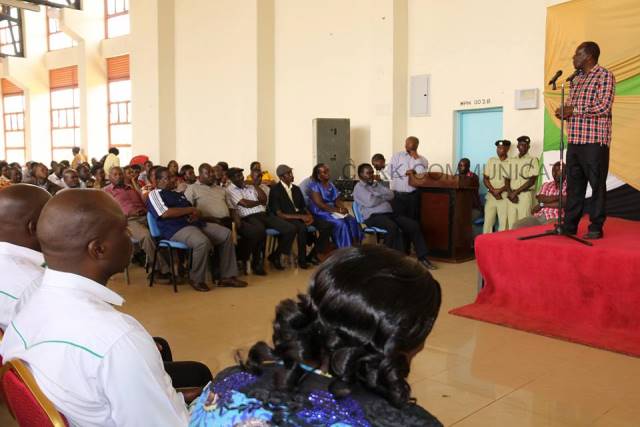 ‘Quality education is the key to the success of any given sound society.’ These are the words of Kakamega County Governor H.E Hon. Wycliffe Ambetsa Oparanya when he addressed thousands of Teachers from Shinyalu and Ikolomani Sub-Counties during a capacity building program held at the MMUST multipurpose hall on Saturday.

Governor Oparanya could not hide his joy and appreciation to all the teachers, students, pupils and parents for a starling performance in the last year’s national examinations. The Governor however challenged the National Government to improve the status of facilities in primary and secondary schools, including staffing so as to make the learning environment more convenient to all the stakeholders.

Oparanya enumerated some of the projects his government has fulfilled in the education sector in the past four years which includes the construction of two storey centers of excellence classrooms in each of the twelve Sub-Counties aiming at separating girls from boys at secondary levels, contracting 545 teachers to support and leverage the most needed science teachers in secondary schools for a stipend, among others. The Governor said Shs.135M has so far been spend on improving infrastructure in 27 Primary Schools across the county. The County Chief also said his government has released Shs.120M bursaries annually to cater for students in each of the 60 wards, 1,206 students in Kenyan universities are on County HELB Loan, 10 students are in China while two in University of Nairobi and Maseno university on government Scholarship Program, just to mention but a few. All these are some of the most important but least considered functions by the National Government, which the Governor promised not to allow to sink in Kakamega County under his leadership.

In addition to the 13 Twin Lab Polytechnics, 142 ECDE Centers constructed in the county and the 141 instructors and 1,901 ECDE teachers employed respectively, Oparanya hinted on his plan to recruit additional tuitors and construction of modern Centers of Excellence for tertiary and early childhood learners where teaching and schooling will be more enjoyable.

Governor Oparanya reminded all the teachers and other residents to rush and ensure they are registered as voters before the ongoing national voter registration exercise comes to an end this Tuesday. The Governor reiterated the need to develop and grow both the national and county governments by having the right leaders in public offices through the ballot.