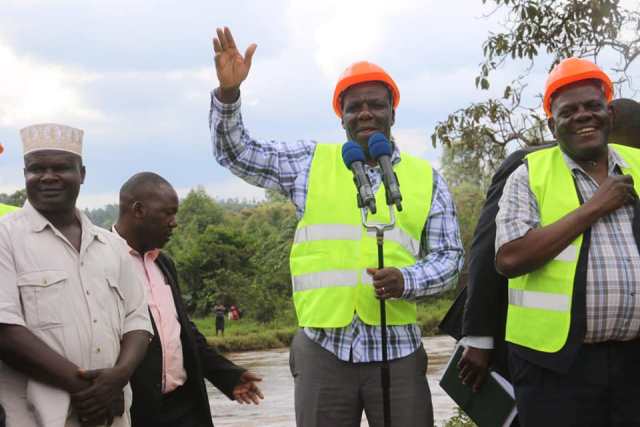 Residents living near Misango Hills in Khwisero Sub-County will soon have access to piped water and electricity in their houses. This was said today by H.E. Governor Wycliffe Oparanya when he made an impromptu inspection of a water supply project in the area. The County Government in collaboration with the Kenya Red Cross is implementing the ambitious project due for commissioning in a few months’ time. The Governor who addressed residents on the banks of River Yala said his government had set aside Shs300 million to facilitate piping works and distribution. He also assured the residents of power connectivity through a partnership between county government and the Rural Electrification Authority (REA).

Water, Environment and Natural resources CECM Baraza Wangwe said phase one of the project will cover a huge area from Emuruba-Ekonjero-Mulufu; Emuruba-Mundaha-Emalindi-Khwisero and Emuruba-Munjiti-Eshibinga-Khumusalaba and will serve about 20,000. Chief of Staff, Robert Sumbi and the County Attorney, Mr. Moses Sande were present.

Meanwhile, Deputy Governor H.E. Prof. Philip Museve Kutima was today the chief guest, as 103 Community Health Volunteers (CHVs) from Shinyalu sub county passed out after a 13 day training programme, at Solyo grounds, Shinyalu sub county, Kakamega County. The deputy governor congratulated the graduands saying Kakamega County government was committed to improving community health for the residents. He said the government was strengthening and empowering CHVs who will play an integral part in the sector to prevent and reduce diseases such as Malaria, childhood Pneumonia, Diarrhoea and Malnutrition among others. “After graduating and having acquired the relevant skills and knowledge, you will be required to fight preventable diseases in our community,” he added. The programme was enabled by a partner, LivingGoods, an NGO working in the rural areas to fight poverty.

Health Services CECM Rachel Okumu called on the graduands to lead from the front with regards to preventing communicable diseases which are a menace in the rural areas. Special Programmes and Gender affairs advisor Peninah Mukabane said implementation of the Universal Health Coverage under the Big Four agenda can be fastracked if the Community Health Volunteers are involved.