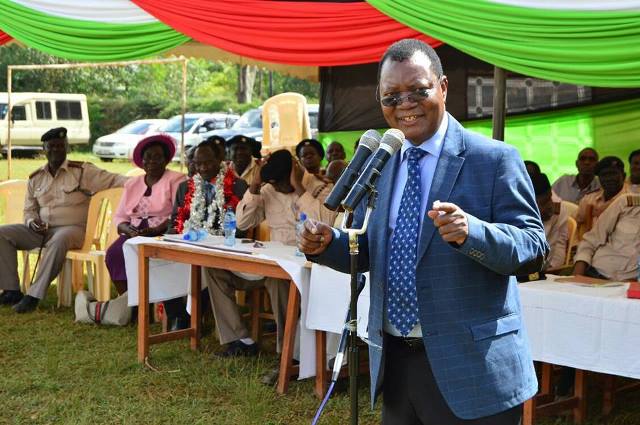 KAKAMEGA County Deputy Governor H.E. Prof. Philip Museve Kutima has called on residents and leaders in the county to support elected leaders as they work towards delivering on promises spelt out in their manifestos.

Speaking during a farewell party for retiring Senior Chief Samuel Malavu Segero at Malimili Secondary school, Isukha West ward Shinyalu Sub County, the Deputy Governor called on leaders eyeing various seats in the county to realize that the offices have current bearers and it is only fair they be given support to deliver in accordance with the electorate’s expectations. Prof. Kutima commended Mr. Segero for the servant leadership he has demonstrated to the people of Ilesi and Shinyalu as a whole. He observed that Mr. Segero has portrayed excellent managerial skills in sensitization of residents on both the county and national governments’ policies.

Area Member of Parliament Hon. Justus Kizito Mugali announced that all day schools in Shinyalu sub county will receive bursary funds to assist needy learners at both primary and secondary levels access education. Kakamega County Commissioner Mr. Abdiruzack Jaldesa on his part called on the residents to embrace unity and togetherness as it was a sure path to realize development. He expressed satisfaction with the cooperation between the county and national governments adding that leaders at both levels should borrow a leaf from the handshake between H.E. the President and Rt. Hon. Raila Odinga and foster unity amongst residents. The retiring administrator has served as the chief for Ilesi location for 21 years. Before then he had a stint at Kenya Airforce as a jet fighter pilot operator.