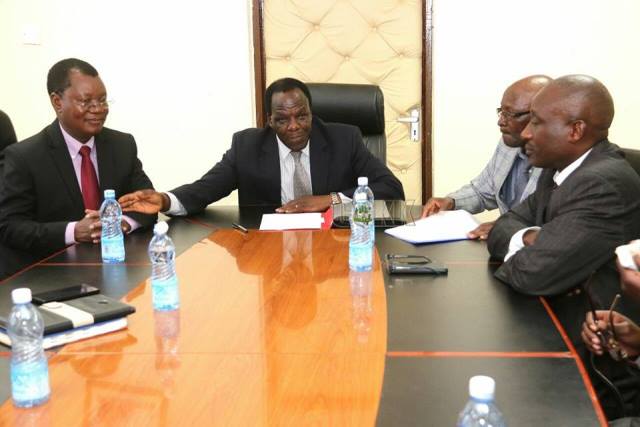 TOP University Academic Staff Union officials drawn from Moi, Kibabii and Maseno university chapters today paid a courtesy call on H.E. Governor Wycliffe Ambetsa Oparanya in his office and requested for assistance to engage Labour and Education ministry authorities on several issues pertaining to terms and conditions of service for their members.

The dons commended the Governor for his development driven political agenda and empathy for less privileged citizens, adding that Kakamega County had demonstrated untainted and visionary leadership to be admired and emulated by other counties. They were led by Jack Willis Okumu Abok, Chapter Secretary, Moi University. Governor Oparanya thanked them and assuring of his support to ensure that relevant authorities received their petition.

LATER in the evening H.E the Governor attended a scintillating football match between Kakamega Homeboyz FC vs Gor mahia at Bukhungu stadium in Kakamega. The latter won 3-2 in regular time. The home team will however rue several missed chances for the loss after being on the driver’s seat twice in the match. Governor Oparanya announced that the celebrated sports facility will close down in June, next month, to allow for commencement of phase ll construction works expected to end in the year 2021.