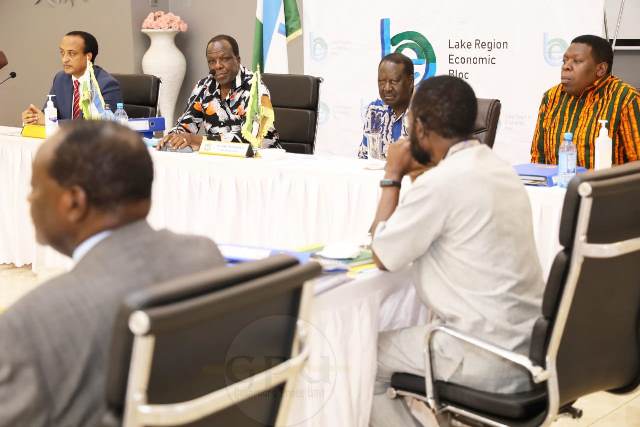 LREB chairman H.E Dr Wycliffe Oparanya said the National Government has started implementing the recommendations but at a slow pace.

Speaking in Kisumu during the 6th LREB Extraordinary Summit, Dr Oparanya who is also the Kakamega Governor blamed cartels in the sugar sector for delays in reviving the sector.

“The process to implement the sugar taskforce report had started but some people have moved to court to block the process. Some of these people are being sponsored by cartels who want to continue thriving in cheap importation of sugar which is killing our local sugar industry,” said Dr Oparanya.

He asked Agriculture Cabinet Secretary Hon Peter Munya to move with speed and gazatte the sugar regulations to regulate the sector.

“I want also to appeal to the National Assembly to expedite the sugar bill which is before the House,” he said.

The Governor appealed to striking health workers to call off their strike and give room for negotiations.

The Summit which was also attended by former Prime Minister Hon Raila Odinga and Devolution Cabinet Secretary Hon Eugene Wamalwa resolved that LREB counties will support the Africities Summit that will be held in Kisumu County in April 2022.

The Governors also agreed to support the Adopt a school Covid-19 programme to help schools in the region have infrastructure required to combat the spread of the virus in learning institutions.

“We have also agreed to establish a data center for collection and documentation of economic activities in the region,” he said.