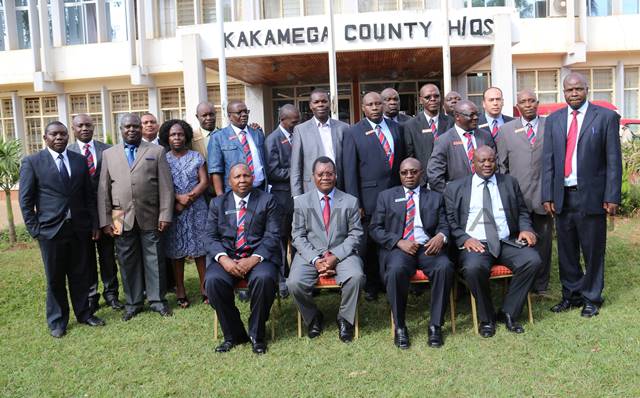 A delegation from the National Defence College based in Karen; Nairobi, today paid a courtesy call to Kakamega County led by Lieutenant General Leonard Ngondi who is the Commandant of the college and Brigadier Joseph Kivunzi at the county headquarters, where they were hosted by the County Deputy Governor H.E Professor Philip Kutima.The delegation comprised of ten students and four teaching staff members.

The main objective of this delegation was to be familiarized with the role of the county government both in regional and national development .The delegation was taken through the historical background, its vision, mission and objectives by the Deputy Governor H.E Prof Philip Kutima.

In taking the delegation through this, the Deputy Governor enumerated a number of success stories in Kakamega County which do not only benefit inhabitants but spills over to other regions outside the county and the nation at large. He reiterated that the provision of specialized health services to the region with the establishment of Kakamega County Teaching and Referral Hospital will not only serve Kakamega but rather the entire region and country. He also mentioned that the improvement of road infrastructure and the rehabilitation, opening and construction of new roads by the county government increases connectivity both locally and increased linkage with other counties.

Pertaining decentralization of services, the Deputy Governor informed the delegation that the county was unequalled in the decentralization of its services up to the ward level. It is envisaged that by February 2017, two more decentralized units i. e Village Units and Community Areas will be in place. He informed the delegation that his county embraces efficient and effective Management of governance and public service to the smallest units of the counties through improved citizen participation. The county has consistently involved its citizens in decision making ranging from project identification, prioritization, budgeting and planning and monitoring of projects and programs. In this case, residents have been allowed to take charge of their development initiatives from the grass-root levels through prioritizing of their needs.

Finally, they touched on security at large and advised the county to work hand in hand with security agents from the National government so as to protect the residents from hooliganism.