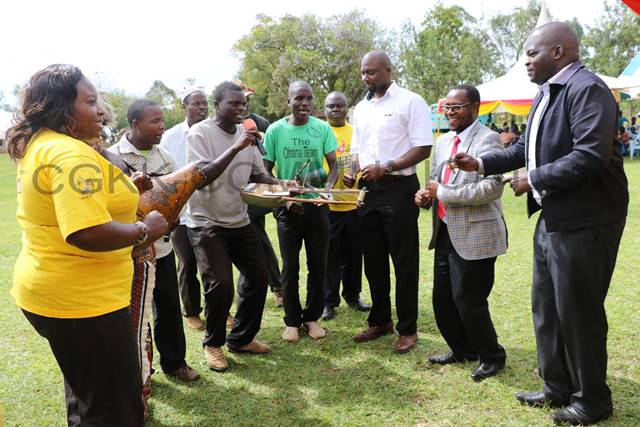 Kakamega County residents joined the rest of the world in commemorating 28th World AIDS Day at Navakholo Friend’s Primary School. The celebration whose main theme was Prevention of New Infections With Focus to Adolescents and Young People was graced by CEC Member for Health Services Hon. Peninah Mukabane.
The celebration saw many partners come together as a way of creating awareness among youths. The partners who made this day success were among others Development Partners (National Aids Control Council -NACC) representatives, National Tuberculosis (TB) team, Population Service Kenya representatives.
H.E. the Governor, Hon. Wycliffe Oparanya through the CEC Member for Health Services raised an alarm that despite H.I.V prevalence going down from 5.9% in 2013 to 4.0% in 2015, there was an increase of 1,935 new infections from 154 per year thus he promised that his government through the County AIDS Strategic Plan that will soon be implemented will be used to guide in tackling Aids pandemic through planning, resource mobilization and ownership of the response.
He urged the partners to commit resources from their health budgets towards the implantation of the strategic plan as it is the surest way to beat this pandemic and this involves pulling together. The governor added that despite the immense program that the county has made, the future of Nation is at risk since more than half of all new HIV infections occur among adolescents and young people of 24 years, thus his government will recommit in doing whatever it takes to end HIV/AIDS among young people.
CEC Member for Health Services Hon. Peninah Mukabane raised concern on the rise of new infections among youths and called for initiation of mentorship programs that will make youths occupied. Hon. Peninah said that Kakamega County is among other counties that have low turnout of youths going for HIV testing, this is because of stigmatization of people living with HIV, thus youths shy off from going for testing and taking drugs thus rise in infections. However she promised to ensure that Viral Load Machine is procured to County General Hospital to avoid blood being taken to Busia County for testing.
County Director for Health Services Dr. David Oluoch said that youths must be encouraged to use protection to reduce infections and urged parents to freely talk to the teenagers about HIV/AIDS infections. He added that those already infected by the pandemic to come out and talk freely to wananchi about the HIV infections.
In attendance were Ministry of Health Officers, Sub County and Ward Administrators among other practitioners.