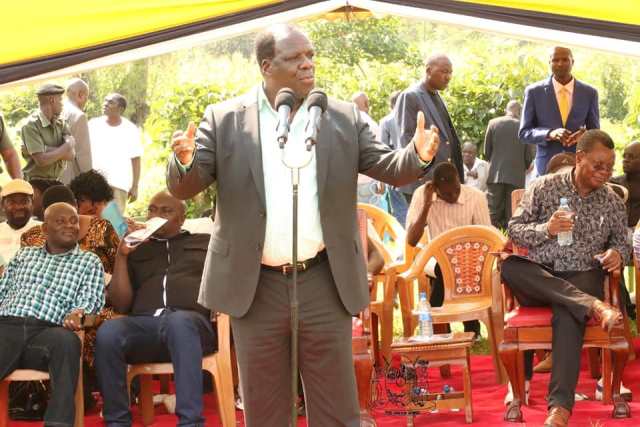 He added that doing so would ensure that the people’s aspirations are met.

The Governor who was among other mourners at the funeral of Mama Ruth Oyiera Ong’atta in Khwisero Sub-County, said public participation contributes to full ownership of the projects by the locals.

Governor Oparanya took time to enlighten the gathering on some of the key projects his government has initiated across all the sectors of development in the County, particilarly with focus on accessibility to clean water, electricity, health services, road network and food security.

“I am committed to ensure Kakamega County residents access affordable clean and safe piped water, electricity, quality health services, among others,” he said.

Oparanya thanked President Uhuru Kenyatta for accepting to support the completion of the ultra modern Kakamega County Teaching and Referral Hospital project, the Level 6 health facility which he said will contribute immensely to the county’s revenue generation through health tourism.

As Chairman of the Council of Governors, H.E. Oparanya asked the national government to quickly reinstate the withdrawn security of Nandi Governor H.E Stephen Sang. He warned government security agencies to prepare to face consequences that arise from such actions that result in disruption of service delivery and exposure of families of leaders to insecurity.

The late Mama Ruth Oyiera Ong’atta was eulogised as hard working, renown farmer, human rights activist and a staunch member of the Kakamega County Land Control Board. She was laid to rest at her home in Eshikhungula Mundeku area in Khwisero Sub-County.