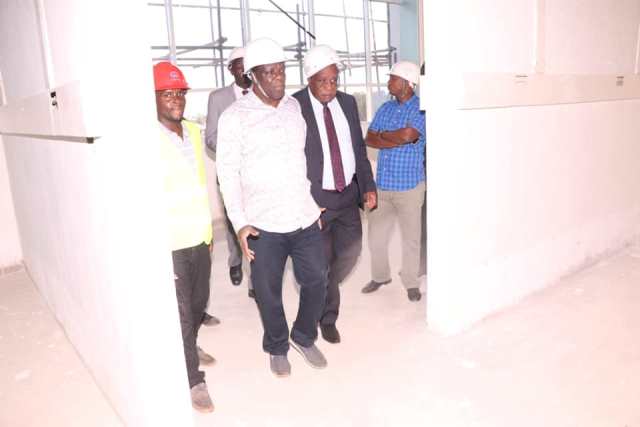 Kakamega governor H.E. FCPA Wycliffe Ambetsa Oparanya has said the first phase of the ultra modern Ksh 6 billion Kakamega County Referral Hospital will we completed by end of June this year. The governor explained that the contractor could not complete the work in March 2020 as earlier expected due to inconsistency in cash flow from the exchequer.

Speaking after a tour of the project, Governor Oparanya said he has instituted a Steering and Technical committee to ensure its timely completion and adequate equipping after completion and added that the county intends to borrow Ksh2 billion from financial institutions to complete the second phase.

The governor noted that the second phase will comprise of a male and female ward, School of Medicine, modern mortuary in addition to purchase of additional medical equipment. He observed that the facility will create employment for over 3,000 people among them doctors, nurses, lab technicians, nurses, support staff and other medical experts once it opens its doors to patients. Already the first phase of the doctor’s plaza is complete. Construction of three more plazas to house the doctors is in the pipeline.

H.E. the governor announced that during his recent visits to India and America he entered into partnerships with medical institutions; an association that will see the institutions second their doctors to the facility to provide quality medical services.

“We expect this to be one of the the best medical facilities in the country as specialists from top hospitals globally will be linked to the hospital to dispense their services,” he explained.

Furthermore, the governor said, he was in discussion with the national government to upgrade Kakamega Airstrip in Shinyalu sub county to a mini-airport to facilitate movement of the hospital staff and other visitors to the county. He pointed out cushioning of patients from the struggle of travelling to Nairobi and Eldoret to seek medical services as the aim of constructing the multi-million facility.

According to the governor, once the massive project is completed it will transform Kakamega town in line with his ambitious program to elevate Kakamega town to a city status.